Homemade chandelier made from waste plastic pipe or plastic bottles

German thrift is well-known! Here is a vivid example of this. After the overhaul of the sewer system, a certain Mr. Straubel had pieces of plastic pipes. Throwing away such «valuables» was not in the habits of Mr. Straubel, so he built a cozy, cute homemade chandelier from pipe scraps and hung it in his office.

The chandelier assembly took quite a bit of time. But I had to thoroughly prepare for work: get a strip and a tube made of aluminum alloy, cut the blanks of the chandelier frame parts, borrow a M10x1 die for temporary use from a familiar locksmith. I also had to compile a bill of materials consumption with the dimensions of the blanks of the parts needed for the chandelier (see the table). How can it be without such a statement?!

Features of manufacturing parts of a homemade chandelier

To facilitate the bending of brackets and brackets made of aluminum alloy, the workpieces for them are subjected to heat treatment — annealed. A strip is applied to the place of bending with household soap and the workpiece is heated in the flame of a gas burner. The desired temperature (550 °C) is reached when the soap trail is blackened. After that, by clamping the workpiece in a vice, using a hammer, they give it the desired shape. The metal retains the plasticity acquired as a result of annealing for up to 2 hours. 10 mm holes are drilled in ready-made brackets and brackets, the burrs are removed with a countersink.

Connect all the elements of the chandelier in the same way: using short tubes with an external thread M10x1 and nuts with washers that tighten the connected parts (Fig. 1). 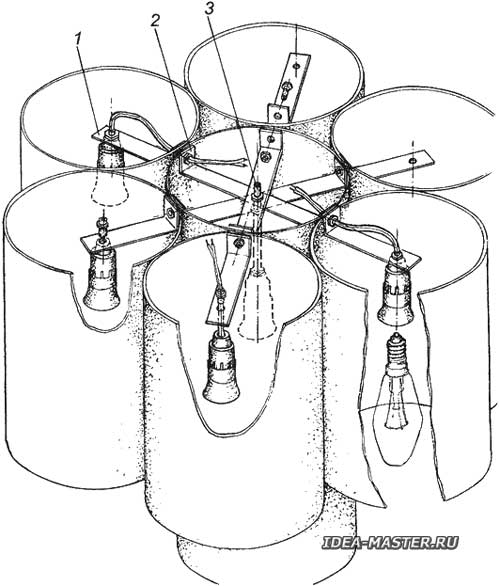 The thread size M10x1 is chosen because the same mounting thread is available in cartridges for electric lamps with a «minion» base. Threading on the tubes is greatly facilitated and the thread turns out to be of better quality if the ends of the tubes are lubricated with household soap.

Large brackets are strung on the central tube and tightened with nuts (Fig. 2), necessarily placing washers.

(Washers are not indicated in the figures for simplicity. — Editor's note.) Side lampshades are mounted on the through-pass tie tubes inserted into the holes in the bracket, as well as in the walls of the central and side lampshades. Nuts are screwed on both sides of the tubes, of course (Fig. 3). 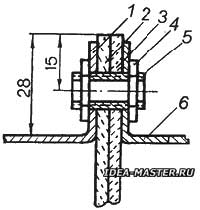 The terminals of the electrical wire, pre-tinned, are connected to the contacts of the electropatrons, tightening the screws tightly, after which the cartridge is assembled. Fixing tubes with nuts screwed on one side are inserted into the holes at the long ends of the brackets, a wire is passed into the tubes, and then cartridges are screwed onto the tubes (Fig. 4). 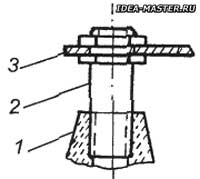 Electrical wires from the side lampshades are passed through the coupling tubes into the central lampshade and the lamps are connected in parallel or in two groups: 4 lamps and 3 lamps. The connections of the electrical wires are soldered and carefully insulated with fabric insulation.

A tube for hanging a chandelier is attached to the central tube with the help of small (transitional) brackets and fixing nuts. Electrical wires connecting the chandelier to the room's power grid pass through this tube. In the walls of the upper part of the pipe for hanging, two holes are drilled into the passage, into which hooks are inserted, bent at the ends of the loop. The chandelier is suspended from the ceiling hook by a loop. The suspension unit is decorated with a plastic cup, which can be bought in the store.

To make such a homemade chandelier, it is not necessary to buy plastic plumbing pipes specifically. Similar results can be achieved by using suitable metal pipes from various household products or even plastic bottles for the lampshades.

The power of the electric lamps installed in the chandelier should not exceed 40 watts. To improve the temperature regime and lighting properties of the chandelier, the lamp's electropatron in the central lampshade is specially installed on a longer tube, that is, it is located below the lamps in the side lampshades. For the same purpose, it is recommended to cover the inner surface of the lampshades with reflective paint, for example, «silver». When using plafonds made of plastics (especially PCBs), be careful not to overdo it with the power of the electric lamps. In the design of the chandelier, you can also use conventional electric lamps (with a base with a diameter of 27 mm) with mounting fittings for them.