What does a homemade hydroelectric power station on a small river mean compared to a hydroelectric power station? And is it worth building it at all when power poles are stretched along every village street, all over the country? But we must learn to save both in large and small. Save money with the light bulb turned off in time. And save money by adding your own little electric stream to the sea of electricity.

Device and construction of a homemade hydroelectric power station

It is known that electricity is generated by a generator whose shaft rotates the engine. The engine of the M. Login hydroelectric power plant is arranged simply: racks with two crankshafts A and B are mounted on a frame of logs (see Fig. 3). Each shaft has three elbows, the angles between which are 120°. The crankshafts are connected by rods to which the blades are attached. 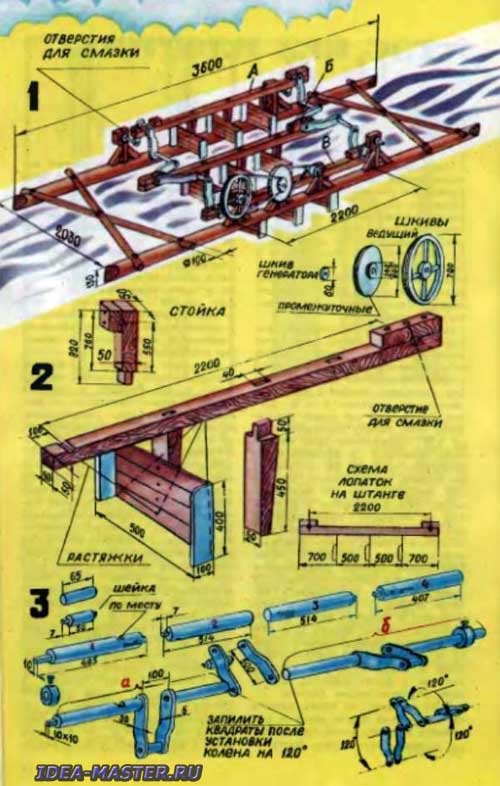 If you put a pulley on the end of one of the crankshafts and connect it with a belt drive to the pulley of a DC generator, the generator will start generating electricity. And if you attach a connecting rod to the drive pulley and connect it to the pump, the engine will pump water to the backyard, to your vegetable garden.

The power of the engine depends not only on the speed of the water flow, but also on the number and area of the blades, that is, on the geometric dimensions of the engine itself. And it can be made of any size, respectively proportionally increasing or decreasing the size of its parts.

We give drawings of an engine that, at a water flow rate of 0.8-1 meter per second, will rotate the generator from a passenger car. The voltage generated by the generator is 12 V, and the power is up to 150 watts.

Before you start building a homemade hydroelectric power station, in a workshop or in a store where car parts are sold, pick up a generator. Prepare materials: boards, logs of small diameter, steel wire, fasteners. Pick a place where a homemade hydroelectric power station will be located. It is desirable that this is a straight section of the river.

Here it is necessary to determine the flow velocity. This is how it is done. On the selected section 15-20 meters long, outline two cross-sections. After that, using a small float, such as a chip, determine the speed of the water flow. The float should be thrown into the water a little above the upper gate and, following it, count the time of passage of the float from the upper gate to the lower one using a stopwatch. It is necessary to make 10-15 such measurements, throwing the float then further, then closer to the shore, and based on the results of measurements, calculate the average speed of the river flow. If it lies within 0.8-1 m / s, feel free to start construction.

The main dimensions of the parts of a homemade hydroelectric power plant are given in Figure 1. We will only tell you how best to make the most complex details.

Crankshaft. It can be made from a single steel rod with a diameter of 16-20 mm. But it is easier to make it prefabricated (Fig. 3). First, cut the blanks of parts 1, 2, 3 and 4 from the rod. Make the cheeks of the knees from a steel strip 5 mm thick. At the ends of the rods, cut squares, and square holes in the cheeks. After connecting the parts, the squares are riveted. First, the parts of the crankshaft «a» and «b» should be assembled (see Fig. 3). Then it is necessary to mark and cut the squares at the free ends of rods 2 and 3 so that the middle knee (after assembly) is located at an angle of 120° with respect to the extreme.

Barbells with shoulder blades. We recommend making rods from wooden slats, blades - from a board or roofing iron. The blades are attached to the rods using vertical slats and wire extensions (see Fig. 2).

Transmission device. The crankshaft, and therefore the drive pulley, will rotate at a speed of about one revolution in two seconds. The generator can also generate an electric current at 1000-1500 revolutions per minute. To get such a number of revolutions on the generator, a transmission from pulleys of different diameters is needed (see Fig.). Grooved pulleys are made of plywood with a thickness of 5 mm. Five circles should be cut for each pulley. They are knocked down with nails or tightened with screws. The drive pulley, which is firmly fixed at the end of the crankshaft, must have a diameter of at least 700 mm. The two intermediate ones are nailed to each other and freely put on the axle. They should rotate easily on this axis. If the speed of rotation of the drive pulley is 30 revolutions per minute, then the diameter of the small intermediate pulley can be assumed to be 140 mm, and the large one — 600 mm. Then the generator pulley (with a diameter of 60 mm) will rotate at a speed of 1500 revolutions per minute. With different numbers of revolutions of the drive pulley, the diameters of the intermediate pulleys will be different. It will not be difficult for you to calculate their sizes.

Drive belts. The transmission pulleys are connected by drive belts. To ensure that the belts are always well stretched, make them out of a rubber harness. Cut the old car camera into long ribbons. Twist each ribbon into a tourniquet, and glue the ends with rubber glue and tie them tightly with twine.

Adjustment. After assembling the mechanism, check whether the rods rotate freely. Turning the drive pulley with your hand, notice which of the rods prevents the rotation of the crankshafts. After that, remove the barbell and enlarge one of the holes for the neck of the knee so that it becomes slightly oblong.