Technology for extracting gold and silver from electrical and radio components. Free method of extraction of precious metals at home 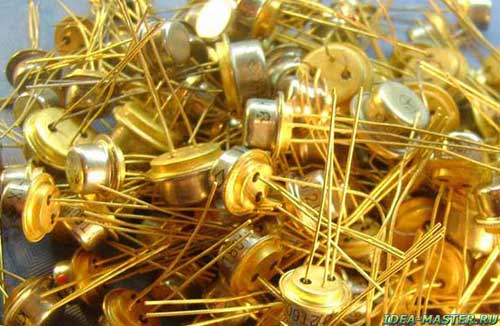 Once in my youth I had to live near a radio factory, in the landfill of which radio components could be collected with a scoop, which we did. Many dragged them to the «flea market» and sold them to radio amateurs, and I, under the influence of my neighbor, who was «chemical» everything, got carried away with the extraction of precious metals from some parts. I had to do chemical work in the kitchen, because there was no other suitable place, and, frankly, I got a lot from my loved ones, since the technology of extracting silver and gold is not a safe thing at all, especially if you do this in the kitchen. I did not manage to get rich, because I was not going to become a gold miner, besides, at the insistence of my relatives, who quickly got tired of my experiments, I had to stop the latter. Soon the family changed their place of residence, moving to the Krasnoyarsk Territory, where neither the «raw materials» nor the neighbor-chemist was already there. New hobbies appeared in a new place, but the neighbor's science remained in his head for life.

I have already published an article on how to gild spinners, and now I will try to share my experience of «mining» both silver and gold from radio components. It seems to me that since the technologies for extracting both precious metals from radio and electrical components are almost identical, it is worth telling how to extract both. I have no doubt that this information will interest many, primarily those for whom chemistry was not a boring subject at school. Of course, nowadays, when absolutely all color metals have become very popular, it is almost impossible to find them in urban landfills, but there are still enough radio and electrical components from old equipment. By the way, many simply do not know how to use the old TV (the same «Ruby»), tape recorder, transistor, microchip, etc. But the precious metals contained in them are enough to gild or cover with silver a spinner, ring or other small things. And what is needed for this is not so difficult to buy in stores now.

So, let's start the conversation by highlighting silver as a less valuable metal.

The starting material for the separation of metallic silver are silver-containing alloys, from which a number of electrical connectors and contacts are made.

Preliminary preparation of «raw materials» consists in the fact that all unnecessary parts and devices intended for processing are removed. First of all, all non-metallic parts (plastics, polymers, semiconductor crystals), as well as metal elements that clearly do not contain silver, for example, parts of contacts that do not touch when these contacts are closed.

Having done all of the above, you will greatly simplify the procedure for dissolving samples, and it will require less acid. Silver-containing samples are dissolved in 30% (by volume) nitric acid at a temperature of 50...60 °C. The «raw materials» are dissolved in small portions weighing 1...3 g, while the next portion is added only after the previous one is completely dissolved. Approximately 3.6 ml of 95% nitric acid is consumed for the dissolution of 1 g of the alloy. As a result of the complete dissolution of the silver-containing alloy, a transparent solution is formed.

Remember that all this work should be carried out in a well-ventilated room, even if it is a kitchen — the window should be open.

And for a better perception of the material, I propose to get acquainted with a brief description of the chemical reagents used in this process.

Silver (Ag). Soft white metal with a density of 10.5 g/cm. The melting point is 960.8 °C, does not dissolve in alkalis, but is amenable to the action of acids (boiling concentrated sulfuric, as well as nitric at room temperature).

Hydrochloric acid (HCl). Colorless transparent liquid with a pungent odor of hydrogen chloride. The maximum acid concentration is about 36%; such a solution has a density of 1.18 g/cm. Hydrochloric acid reacts with silver nitrate to form silver chloride precipitating.

Sodium bicarbonate, sodium bicarbonate, baking soda (NaHCO3). White crystalline powder with a density of 2.16...2.22 g/cm. At 100...150 °C completely decomposes, turning into Na2CO3. It is used in medicine, for example, to wash the skin when acid gets on it.

All these reagents can be purchased in household stores.

The raw material for metallic gold is produced by gold-containing alloys, from which a number of electrical connectors and contacts, chip housings, transistors, clocks, etc. are made. I had to use the chips of the following series: 108, 109, 115, 119, 123, 128, 130, 133, 136, 149, 156, 162, 175, 178, 185, 188, 198, 229, 231, 249, 505 and others, as well as transistor housings of the following types: Ct 301, Ct 603, Ct 605, Ct 608, Ct 644, etc. A characteristic difference of such materials is their golden color. The gold content in the raw materials (samples) is up to 10% (by weight). But it must be borne in mind that the gold content indicated in the passport data of such products often does not correspond to reality, and usually it is much less than the value given in the passport. And keep in mind that the gold content in radio components manufactured before 1989 corresponds to passport data, but in subsequent years, gold was added to radio components significantly less (by almost 40%) than promised in the passport. This is me so that they do not build grandiose plans, since not always a sheep is worth the dressing, as the well-known saying goes.

You can work with gold-plated watch cases without any trick.

I will not talk about the preliminary preparation of gold-containing blanks, since everything must be done in the same way as when preparing silver raw materials.

Gold-containing billets are dissolved in a mixture of concentrated hydrochloric and nitric acids (aqua regia) taken in a volume ratio of 3:1 (by volume) at a temperature of 60...80 °C. As with silver, this work is carried out in a ventilated room, which should never be forgotten!

The blanks are dissolved in small portions (weighing 1...3 g), adding the next portion only after the previous one is completely dissolved. Approximately 2.3 ml of 36% hydrochloric acid and 0.65 ml of 95% nitric acid are consumed per 1 g of gold-containing elements. The resulting solution, colored dark green due to the large amount of copper salts present in it, is slowly evaporated, reducing its volume several times. Then, a few ml of hydrochloric acid is added to the remaining solution (until the brown residue of iron compounds is completely dissolved), and sodium chloride (table salt) is poured into the solution at the rate of 0.2 g of salt per 10 ml of gold-containing solution, after which, with weak heating, the solution is evaporated to «wet salts». Then add a few ml of boiling water and again evaporate the solution to «wet salts», after which a few ml of hydrochloric acid are added again and evaporated again. A similar evaporation procedure is necessary to remove nitric acid residues, which will avoid the loss of the released gold.

To precipitate gold, a 0.5% hydroquinone solution (0.5 g of hydroquinone in 100 ml of water) is added to the previously obtained dark green solution at the rate of 1 ml of hydroquinone per 100 ml of solution, avoiding a large excess of hydroquinone. The resulting mixture is kept for about 4 hours, stirring it periodically. The precipitate (gold) is filtered through a dense filter, washed with water acidified with hydrochloric acid, dried and melted at a temperature of 1100 °C under a layer of borax, which protects the gold from evaporation during heating and melting.

After cooling the alloy, the crown of metallic gold is easily separated from the remnants of the frozen borax. That's it!

Now briefly about the chemical reagents used in the extraction of gold.

Gold (Au). Soft metal with a density of 19.32 g/cm. The melting point is 1046 °C, does not dissolve in acids and alkalis, but lends itself to the action of mixtures of acids: hydrochloric and nitric («royal vodka»), sulfuric and nitric, sulfuric and manganese.

Hydroquinone [C6H4(OH)2]. Colorless crystals, density 1.358 g/cm, highly soluble in alcohol. At 15 °C, 5.7 g of hydroquinone is dissolved in 100 ml of water. It is widely used in photography as a developer component.

Borax, sodium tetraborate (Na2B4O7x10H2O). Colorless crystals, density 1.69...1.72 g/cm³ soluble in water (1.6 g anhydrous salt in 100 ml of water at a temperature of 10 °C). It is used in soldering for cleaning metal surfaces, for the preparation of special grades of glass, enamels, glazes, etc.

In conclusion, I would like to urge everyone who will use these techniques to be extremely careful and cautious. Do not leave the chemical reagents used unattended, store them in tightly closed dishes in places inaccessible to the uninitiated and, first of all, for children, and at the same time never forget that God protects the safe.

These techniques are complete, detailed, accurate and, very importantly, proven in practice.

All materials of the section «Various: ideas, tips, techniques»